a term used in the Don Felder autobiography, “Heaven And Hell My Life In The Eagles 1974-2001”

On a Saturday morning November 28, 1993 on Pacific Coast Highway in Malibu, I wore a Santa Claus suit, and brought along with some pre-painted signs and a bell, and attempted a continued effort to obtain the autograph of Don Felder, then, of the band Eagles on some more items of Eagles memorabilia.

However now, after over 27 years, it’s time to put this story to some rest and move on well past it. Without going into all the details over and (over) again, here is basically what happened and why:

To begin, I starting to collect autographs from the band Eagles during a time (1986) where there was no eBay, no Internet, and collecting signatures was often as easy (or as hard) as simply asking a celebrity for one, if you could ever find him or her. It was another era, a very early infancy of collectability, and completely different than from the madness and business we see today in the world of memorabilia autographing.

Finding where Don Felder may be appearing, or any live concerts he was in, outside of a few NAMM Conventions in the late 1980’s and early 1990’s where I did see him, was very, very difficult. Unlike the other 6 members of this band who were literally all over and everywhere around Los Angeles during the years of 1984-1994.

For a time, it seemed Don Felder had all but retired.

On Saturday November 28, 1993, I took some pre-painted wooden signs asking Don Felder to either contact me and or sign my items for me, out to Malibu. I dressed up as Santa Claus and, for a few hours, danced and rang a Christmas bell on Pacific Coast Highway hoping Mr. Felder might find such efforts from a fan both entertaining and flattering. Well, he did not. It turned out both he, the Malibu Police and his team of lawyers all found no humor in my little stunt. Instead it evolved into quite a terrible mess and misunderstanding. Lost at that time, was probably the possibility that this man would ever consider me a fan, let alone ever sign anything ever for me again.

In fact, it got worse.

Starting on May 27, 1994, the Eagles were scheduled for 6 nights of reunion concerts at the Irvine Meadows Amphitheater and were staying nearby at The Four Seasons on Fashion Island, in Newport Beach. Knowing the band was staying at this hotel, I booked my wife and me there, too, for several nights as I had tickets to four of their six opening night concerts. I was informed shortly after my arrival at the hotel by their road and security manager Mr. Smokey Wendall that there would be no autographs, no attempts for any autographs and that it may be best that I simply check out of the hotel. After the concert that night, I took the advice of Mr. Wendall and did check out of the hotel the following morning.

It was later on the following week, I was served a restraining order from the legal camp of Don Felder instructing me through the terms of this order, to stay away from Don Felder. Thus, I strictly complied, sort of. As time went on for the next 14 years, I was able to obtain Don’s signature in and among a very public crowd of other fans at the Katrina Concert, some golf tournaments and again at the NAMM shows.  Then, came his autobiography and book signing:

On May 6, 2008, Don Felder, appeared at Barnes and Noble Bookstore at the Santa Monica Third Street Promenade, for the opening night of a month-long book tour.

I took my turn in line with the 30 or so others that were there getting Don Felder’s just-released autobiography book, Heaven and Hell: My Life In The Eagles (1974-2001), to be signed. After the book signing was over, I walked up to him where he was seated at a table, along with his staff and staff from the bookstore. I introduced myself, finally, on my terms, explained myself, and apologized, as best and honestly as I could. In the case of Mr. Don Felder, I simply wanted to right a wrong and show him that I was nothing more than a fan.

When I had finished saying what I came to say, Mr. Don Felder reached out his arm, and the two of us shook hands. I don’t know if he fully believed me, or fully accepted my apology, but, whatever he reasons where for shaking my hand, he certainly was under no obligation to do so. I just hope to this day he does believe me. Sometimes, things do work themselves out.

I have seen Don Felder since the day of his book signing, at other book signings and events.

Don Felder graciously has signed autographs for me since. Whatever his reasons are, I thank Mr. Don Felder. More so, I thank him for a career of so much amazing music, and for so many incredible songs, riffs, concerts and smiles put on my face as well as fans all over the world.

as I ask and seek his or her signature.  Not only do I care while

asking them, more importantly I care what they think afterwards as well.

Don Felder has made Rock and Roll music a much better place to enjoy.

Hopefully, and with a little trust and faith, he knows that I am Just A Fan. 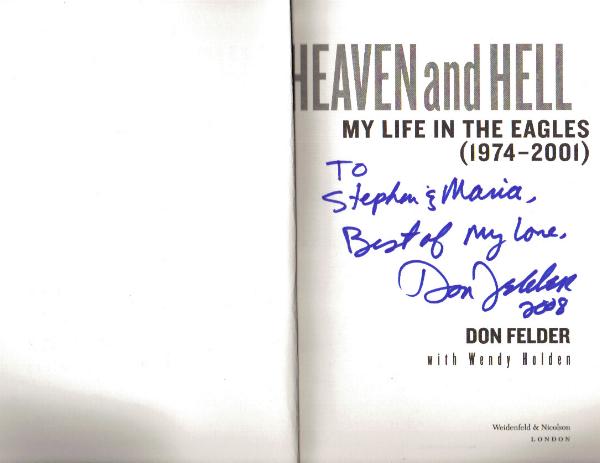 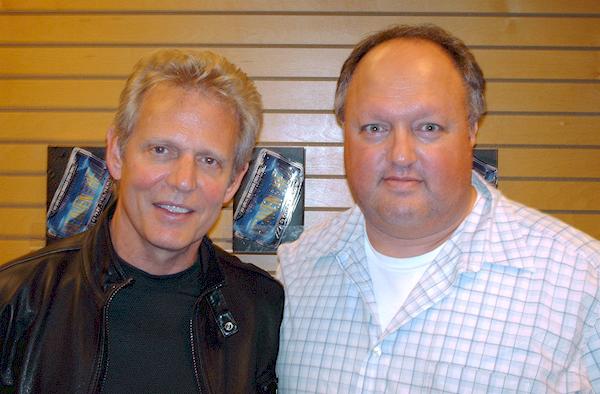 Mr. Don Felder and me at Barnes & Noble in Santa Monica, May 6, 2008.
Mr. Felder wrote a book because he needed to, answered many questions because he wanted to, and shook my hand even though he didn’t have to.